The Ethereum blockchain is experiencing an overload right now, which may be resulting in sky-high network fees. Take note of the fee before sending/exchanging your ETH or ERC-20 tokens.

Atomic Wallet doesn’t take any fees for sending/receiving operations. All the network fees within the wallet are set in such a way to ensure fast and safe confirmation on the blockchain.

You can set a custom fee for BTC, LTC and ETH coins.

What are Network fees?

Every transaction on a blockchain requires a network fee. This fee is paid to miners, who are constantly spending resources such as computing power and electricity to process transactions and include them to the next block on the blockchain. The network fee is a reward for the performed job. Logically, the more you wish to pay as a transaction fee, the faster your transaction will be picked by the miner to be included in the block.

For different assets, the network fees are calculated differently. For Bitcoin and BTC-like assets such as LTC, BCH, DGB, etc. – the fee is influenced by:

The network fees for BTC are measured in Satoshis per Byte. You can always see the network fee in Atomic Wallet. It is also possible to adjust the fee for BTC and LTC. 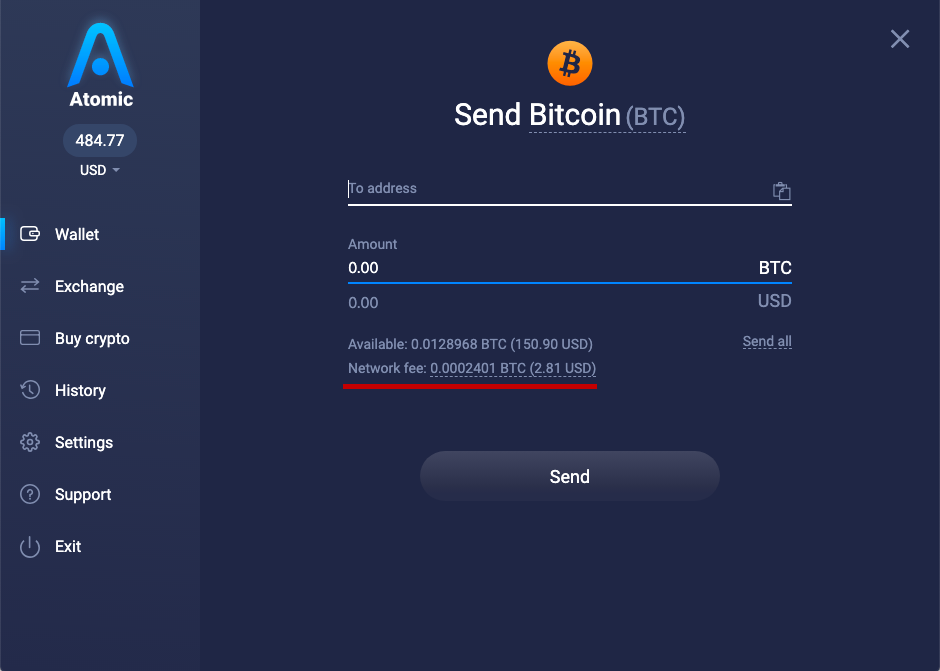 But network fees are not calculated exactly the same for all of the assets. For Ethereum the network fee is paid in Gas, which is an internal unit of the ETH blockchain. The amount of Gas paid for the operation is based on the type of transaction being sent.  If you’re sending to a heavy smart contract, you will need to pay more Gas. It is cheaper to send ETH, that ETH ERC20 tokens.

In Atomic Wallet, the fee is calculated as:

If a transaction requires less than a default network fee, the remaining amount will just stay on your address.

Learn more about network fees and Atomic Wallet in our article here.

Did this answer your question? Thanks for the feedback There was a problem submitting your feedback. Please try again later.
Last updated on June 28, 2021